“The Rage of Dragons” Book Review

The Rage of Dragons is an exciting and unique fantasy revenge story that is well worth the read. 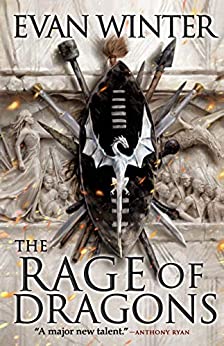 The Rage of Dragons is the debut novel from author Evan Winter, an exciting revenge story, and the first entry of a projected four book military fantasy series called “The Burning.”

In a genre where the current trend is to make everything as big as possible, usually through massive worlds, a huge cast of characters, and hundreds of subplots, The Rage of Dragons is refreshingly focused. There is a single protagonist, the story takes place within one country, and there is not much to distract from the main plot.

The world, although so far not as big as many other fantasy worlds, is still very well realized. The culture, history, and government of the Omehi people is well understood by the end of the book, and stays consistent the whole time. Something many readers will appreciate is that the world building is done throughout the story and worked into the plot, with only a few excusable info dumps. The culture and world are reflected in the characters, with each and every character behaving like they grew up in a different part of this fictional society, making the characters themselves a part of the world building.

They are also extremely well written just as people. From the heroes to the villains, everyone has believable motivations and a personality. Their actions make sense given what is revealed about them and the world they live in, and they never just suddenly change for no reason for the purpose of “subverting expectations.” Beyond that they are easy to connect to emotionally. The protagonist has to fight, struggle, and fail over and over again to get anywhere. He has no supernatural gifts or natural talents to protect or help him through the plot, and there is no guarantee that he will live. Seeing him struggle so hard and feeling like he really could die at any point makes him more real and builds the reader’s attachment to him.

This book is an excellent debut for the author and first entry for the series. It feels unique within its genre, has very few if any objective weaknesses, and is well worth the read.